I like factory building games, but this one feels quite raw at the moment:

But I'd like to play future updates, if you decide to polish the game

Custom machines work only at 50% efficiency. also the machines outputs need to be able to reach the outside of the purple square for it to count. Maybe a combination of these two things could cause it to get worse

thanks now i know why please keep up the good work

Since this is a prototype for the factory shrinking mechanic I will focus on the factories. First it was not immediately obvious how to get back out of a factory. I had to get read the instructions again. Maybe put a button for that somewhere. This experimentation with exiting left me with multiple extra factories. Which leads to my second suggestion. Give an option to delete factories. Maybe limited to only factories that have no instances placed to prevent complications. Being able to rename them from the outside and maybe even sort them would be nice too.

In regards to the prototype itself my main other issue was not having enough belt options. With the belts only being able to split equal amounts in opposite directions it substantially limited how well I could place factories to take advantage of large producers.

Thanks for the elaborate feedback! The back button is a good idea. Better splitters and filters are coming soon too

Also I was intrigued enough to purchase assembly planter. And it's great fun, but after a while playing it I want to reiterate on my point about categorizing factories. If you're going to be making dozens of factories they need to be manageable. Give an option to rename them, sort them, manually change the icon, and it would be ideal if you could split them into separate folders or tabs. So you don't have to deal with all your low level farms when looking for a higher level manufacturing complex.

I agree there should be better ways of managing the factories. Since you played both games I'd like to hear your opinion on the non simulated nature of the prototype. Do you like the fact that you can start miniaturizing right away or do you prefer the simulated way assembly planter starts with? I've never seen any other non simulated factory building game before and it's kinda hard to judge how unintuitive this is for new players and if it's even all that fun at all.

Well the only real benefit I can see of not simulating the factories is that it will take into account the actual time for each machine to produce and the items to move on the belts. This is a little more intuitive than it just using the highest machine time and ignoring transport. So that would incentivize making efficient factories. But on the other hand I don't see any reason why you couldn't do that kind of thing inside the factory simulation. It might be a bit more computationally complex, but it would just be once instead of all the time when the factories are actually running.

I do like the fact that changing one machine propagates the change to every other instance of the factory, but again I don't see any reason why you couldn't do the same thing in the kind of factories assembly planter uses.

Also I don't know of any other games that do this kind of recursive factory building, and I would very much like too, but I do know the factorismo and compact machines mods for factorio and minecraft respectively do it.

Mine crashed before i could even figure out how to start playing..

belts doesnt work, you can only connect factories to one other thing making it super hard to do anything, putting the belt on the edge of the map facing a factory makes the game crash

Thank you for the feedback. I was able to reproduce the crash but the belts seem to be working fine. Does a simple setup like in this screenshot not work for you? 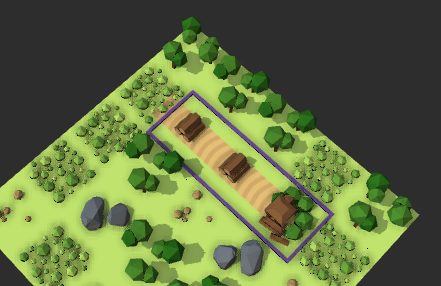 i mean that you should be able to use the belt as an alternative path to another factory, (example,) treecutter to treefarm and the treefarm also recieves dirt from the dirt digger (as an example I cant remember all the names of the factories)

You mean that it's not possible to split item streams onto several belts? If so then yes, splitters and filters are not yet implemented. But all the base machines are made in a way that you can build factories without that.

and also the map should expand and more factories, more stuff needs to be added,

Yes of course. This is just a small prototype not a finished game